"“The narrow narrative volume of Demirtaş has it all. There are moments when the breath falters while reading. For example, in a story about the holiday mood of a harmonious family and the infatuation of a young woman, the idyll tips over and rape and murder put the finishing touches.”

From the book review of Focus.de about "Morgengrauen" by Selahattin Demirtaş

Selahattin Demirtaş was born in a Zaza-speaking family in Elazığ in 1973 where he completed both, his primary and secondary education.
Upon graduation from secondary school, he took the university entrance exam and started his college education in Dokuz Eylül University in the Department of Maritime Commerce and Management, where he would face political problems that would force him to leave school without finishing his degree. He returned to Diyarbakır and retook the university entrance exam, after which he enrolled at Ankara University Law Faculty. After college, Demirtaş worked as a freelance lawyer for a time before becoming a member of the executive committee of the Diyarbakır branch of the Human Rights Association (IHD). The IHD Chair at the time was Osman Baydemir who was elected as the mayor of Diyarbakır at the following local election, when Demirtaş replaced him as the chair of the Diyarbakır IHD. During his term as chair, the association focused heavily on the increasing unsolved political murders in Turkey.
Demirtaş started his political career as a member of the Democratic Society Party (DTP) in 2007 at which time he stood as one of the “Thousand Hope Candidates” for the DTP and several other democratic organizations in Turkey. He was elected to the 23rd Parliament and became the Parliamentary Chief Officer for the party at the age of 34. The DTP was closed down by a Supreme Court order in 2009 and the DTP MPs moved to the Peace and Democracy Party (BDP). The BDP held its first congress in 2010 and elected Selahattin Demirtaş and Gültan Kışanak as its new co-chairs. Demirtaş contested the 2011 elections as part of the joint “Labour, Democracy and Freedom” list endorsed by the BDP and 18 different democratic political organizations, this time from Hakkari. He was re-elected to the 24th parliament.
Demirtaş was the co-chair of BDP during the period when the peace process and negotiations kick-started in Turkey. In 2014 Demirtaş and Figen Yüksekdağ were elected as the co-chairs of the Peoples' Democratic Party (HDP) – a new initiative originating from a three-year-old coalition of the BDP and various different political parties and organization under the auspices of the Peoples' Democratic Congress (HDK) - for the 2014 presidential elections of Turkey, being one of three candidates and hoping to attract left-wing voters. Demirtaş was co-leader along with Figen Yüksekdağ during the June 2015 Turkish general election, the party's first campaign in a general election. The HDP came in fourth place with 13.12% of the vote and 80 out of 550 seats. 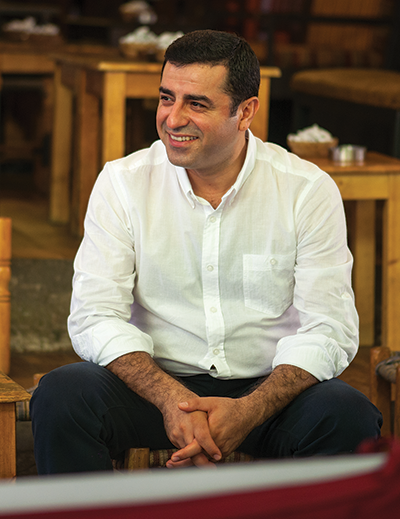 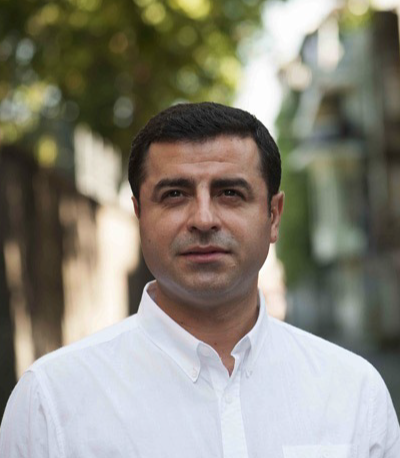 On November 4 th , 2016, Demirtaş was arrested along with Figen Yüksekdağ and other HDP MPs, accused of spreading propaganda for militants fighting the Turkish state. Demirtaş stated he is not a "manager, member, spokesperson, or sympathiser" of the armed PKK group. On January 18, 2017, Turkish prosecutors announced they were seeking a 142-year prison sentence for Demirtaş. On September 7, 2018 he got sentenced to 4 years and 8 months for a speech he had made at a Newroz celebration on the 20 March 2013. On November 20, 2018 the European Court of Human Rights (ECHR) ruled Demirtaş should be released from preliminary detention. On November 30, 2018 a court in Turkey ruled he shall remain detained despite the ECHR ruling to release him. According to the verdict, the ruling of the ECHR was not definitive and not binding. The sentence he received the 7 September 2018 was upheld on December 4, 2018 by an appeal court. On the 31 December 2018 the lawyers of Demirtaş appealed the sentence at the Constitutional Court. According to the New York Times more than hundred charges were brought against him. The Grand Board of the ECHR, which examined the opposition, decided, in accordance with the requests of both parties, to re-examine the appeal and to hold a hearing on 18 September 2019. The Grand Board will not only review the judgment in accordance with the provisions of the ECHR, but will also reassess all objections. Since 4 November 2016 he is detained in the prison in the F-Type prison Edirne, far away from Diyarbakir, where his family lives at. In detention, he wrote a book titled “Seher” containing 12 fictional short stories. The Turkish edition has reportedly sold more than 200,000 copies. The rights for this book in English, was bought by Sarah Jessica Parker, who published it under the title “Dawn: Stories”. His book “Morgengrauen” in German language was published by Penguin Verlag in October 2018.

Former HDP co-chair Selahattin Demirtaş has received the “2019 Award for Special Political Courage,” with his wife attending the ceremony to get the award due to the former party co-leader being in jail. “I accept this award on behalf of all political prisoners in Turkey, female political prisoners in particular,” Demirtaş said in the letter sent to the ceremony.
Read More